28 May, Menstrual Hygiene Day
On the occasion of Menstrual Hygiene Day, Mera Parivar & Thr Helping Hand(THH)  organized an awareness on “Breaking the Taboo” with over 500 teenage school girls of Government Girls Senior Secondary School, Jackabpura in Gurgaon, Haryana State, India.  The girls were students of Class VI to Class X. They are girls age between 12 – 18 years.
The girls giggled when Mera Parivar  & The Helping Hand Team began talking about menstruation. Most of them were shy and were not responsive about the subject. They were curious but did not open up. Towards the end of the day, the girls slowly began to whisper among them-selves and eventually started responding and asking questions. 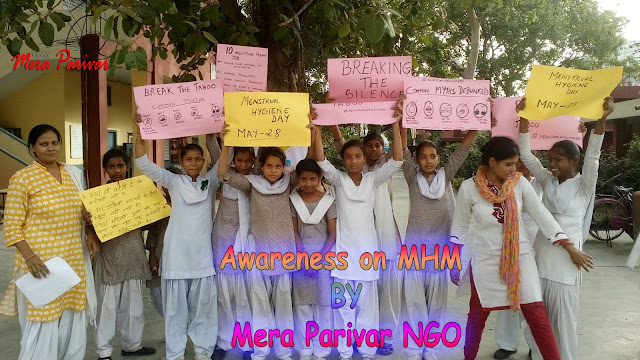 Some of the response and question were:
·         Girls wanted to know more about menstruation – what they should do about heavy flow or less flow etc
·         They said that were restricted from doing certain things such as visiting the temple or not to take certain food such as Achaar ( Indian food)
·         The Girls said that they do not miss their class during menstruation 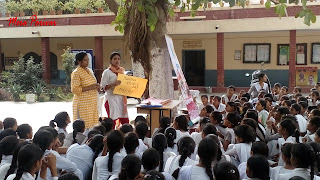 ·         Many of the girls reveal that they did not share any kind of difficulties or problems such as cramps, stomach pain during menstruation with their parents, nor asked them about anything about menstruation.

Objective of the MHM awareness with teenage girls. 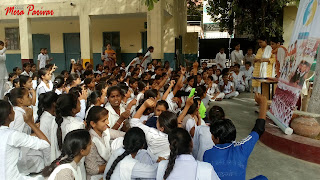 Significance of the Day – May 28
May is the 5th month of the year, representing 5 days, or the average number of days (between 2-7) a woman or girl spends menstruating each month. And, 28 represent the average number of days in a menstrual cycle.
MHM and Mera Parivar & The Helping Hand :
Women empowerment is one of the key focus areas of Mera Parivar & THH .  While taking up empowerment process such as skill building and income generation for the women, Mera Parivar  THH is continuously engaged in creating awareness and advocacy on women’s rights.
Though women in urban set up like Gurgaon know about menstruation and use of sanitary napkins, women are not aware of the need to break the taboo surrounding menstruation. Women in Gurgaon like any other women in India or across the world believe in the taboos and restriction associated with menstruation. In Gurgaon and India at large a menstruating woman is considered “impure” and therefore is restricted from performing certain duties and work, such as “puja” – performing religious rites and worship or entering a temple. They were also restricted to touch males with the belief that it will “impure” the males. More over a menstruating woman is restricted from eating certain food such as Achar (Indian canned foods) with a belief that it will harm the body.
In his situation Mera Parivar & THH  finds that it is extremely important to take up awareness and advocacy for breaking the silence over the restrictions imposed over menstruation.
Moreover since it is associated with bodily discharge it is also extremely important to associate the awareness with cleanliness, sanitation and hygiene.
The MHM campaign is therefore a right to education about menstrual hygiene. It is also about right to sanitation and sufficient water.
The MHM campaign is also about the right to health. It is further linked to girls and women’s physical, social and mental well being. Empowerment and right to education on menstrual hygiene and breaking the restriction will further enhance their capacity and potential. This will eventually increase their productivity, helping women to be able to work more and even earn more, thus helps in their economy and living standard.
Education on menstruations, menstrual hygiene helps to dispel myths, stigmas and negative perceptions about menstruation. Bringing girls for interactions and discussion about menstruation helps them understand about themselves, their own body and actually empower them to take decision on their own body.
We acknowledge Johnson & Johnson for providing all logistic help

Posted by Mera Parivar at 21:37 No comments: