The Verge Of Hearing ((The Story of Vijay Pal) 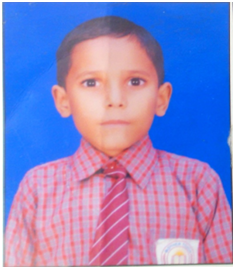 Vijay Pal, is a 2nd standard student. He is the second son of Suman, who is working as a house keeping in Mera Parivar NGO, Gurgaon. Her husband work in a company as a servant, cleaning the areas and serving the workers, he earned Rs.7000/- per month. Vijay family are originally from Lucknow. Ten years ago they moved to Gurgaon hoping to get better livelihood. Vijay’s parents were illiterate and uncivilized. So, for them it is impossible to get high paid job, so they struggles in many ways. They live in a small rented room which cost most of the father’s income. They also didn’t have much knowledge about healthy living as well as their income didn’t support which is beyond their efforts.
When Vijay was one year old, he happened to face uncertain situation. The seed of the fruit entered into his ear. About 6months they haven’t got any check up and were not take it seriously. However, the time goes by and Vijay’s ear became worse. His parents took him to hospital several times. Doctors advised his parents to undergo surgery. Vijay’s parents were spending enough of their income in medication though it is very limited. They understood the advised that was given by the Doctors, they are worried and helpless. Doctors also advised his mother that she need to be careful while bathing her son, entering water in his ear can cause serious problems, even to damage his brain and hearing. Vijay is at the verge of his hearing problem and malfunction of his brain. He doesn’t give up his studies no matter what the circumstances, he continues to go to school and persistent to become someone successful in life.
Vijay’s parents do their best helping their child, after taking X-ray Doctor also diagnose that his ear drum has already damaged, he informed his parents that the only possible way to sustain Vijay’s normal life is to undergo operation. However, for Vijay’s parents, it seems like they are facing the wall or giant problems which they would never overcome. Vijay’s mother is mourn in helpless and hopeless, thinking that their family income will never buy them healing. They wanted to do operation, however, they did not know anywhere else to turn but Mera Parivar NGO. So they brought their concern to the canter. Hearing and knowing Mera Parivar NGO took initiative in sharing their struggles and bearing their burden with them. Mera Parivar hopes that Vijay could be safe and restore before it is too late. To regain all the strength, to bring him back from the edge of hearing and help him fulfil all the purpose in his life. So, here is the opportunity to be part of Vijay’s life story. Here is the chance to be one of the resources for transformation to the boy and his family. We aim
We never know what Vijay could become in the future. We never understand how our small gift can mean so much to people who are in need. We may think this life is full of good things and wants or unending desires. See, there are people who strive to get their daily needs, living hand to mouth. Well! There are more looking for a place where the moonlight didn’t pass through their silver shining in the midnight or where just a drop of rain could be avoid. While there are chances, make the most of it, this chance may never wind back to you in time when you need most.
Be a builder, an encourager and a source of transformation to someone or to the community, let people speaks of your goodness and rhymes like you never know.